17 shares
Pirate’s Dinner Adventure in Buena Park is a family-friendly combination of live theater, dinner and dramatic entertainment. Located on Beach Blvd, this dinner theater is in the same area as Knott’s Berry Farm and Medieval Times. Disneyland is a 15 minute drive away. With so many excellent entertainment choices, is Pirate’s Dinner Adventure a good choice for your family? Keep reading for my full, honest review!

My family and I received complimentary tickets to attend Pirate’s Dinner Adventure. All thoughts and opinions are my own. Mom Rewritten uses affiliate links which means I may earn a small commission if you purchase through the links in these posts. As an Amazon Associate I earn from qualifying purchases. For more information, see the Privacy Policy and Disclosures tab. For more ideas on what to do in the Buena Park and Southern California area, be sure to check out my post.

When attending Pirate’s Dinner Adventure, many guests dress in pirate garb. This is encouraged for young and old alike. My son brought his pirate hat and we saw many guests wearing bandanas and carrying light-up pirate swords. There are, of course, plenty of costuming accessories for sale in the souvenir shops inside the lobby. The lobby is appropriately decorated with a giant pirate’s map and skeletons.

Purchasing Tickets for the Event

When I was at the ticket window getting our tickets there was a family of 7 next to me trying to get seats for that night. Unfortunately the show had sold out, which I understand is fairly regular. Don’t expect to just show up and try to purchase tickets, it’s best to buy ahead of time.

I highly recommend purchasing discounted Pirate’s Dinner Adventure tickets through my travel partner Get Away Today. You’ll still need to call ahead of time to book your reservation.

Tickets can also be found on the website or through Groupon (for select nights only). Sign up through Ebates first, then click Groupon to purchase – you’ll receive an additional 9% cash back! Even with your Groupon ticket, you’ll still need to call ahead of time to book your reservation. Before entering the theater you’ll have your group photo taken. Printed pictures will be brought to you table-side during the show. You can purchase them, or not. It was recommended that we arrive 60 minutes before the show. This allowed plenty of time for purchasing a drink at the bar, souvenir shopping, taking in the pirate decor and a restroom break. There is the opportunity to have your child’s face painted for an additional charge.

Unless you’re planning on shopping, I don’t think you need to get there quite that early. We did a lot of standing around, waiting for the doors to open. Actually we have a toddler, so technically that just meant we took turns chasing her through the crowds! As far as the pre-show appetizers at Pirate’s Dinner Adventure, they are tray-passed through the lobby. We saw meatballs on toast, ham and cheese open-faced sandwiches, and carrots and celery with ranch dressing. Not too special; I’d wait to eat and save room for the hearty dinner instead. However you can purchase both alcoholic and non-alcoholic specialty drinks in the lobby, then bring them into the theater.

There is a pre-show in the bar area which introduced the pirates. We were in the entryway room but were able to watch on a television. Each pirate walks through the lobby, carrying a colored flag and leading guests that are seated in his colored section. We waited until the orange pirate came through and then followed him with the rest of our group into the theater!

If you choose a seat in the upper part of the theater, know that you won’t be allowed much elbow room. Guests were squeezed in pretty tight in those last few rows. Also, there are some seats that don’t have very good views of the action. In fact some spots have obstructed views with all the pirate ship rigging and poles in the way.

I recommend opting for a seating upgrade that allows for more space and an unobstructed and closer view of the action. My family and I were seated in the second row of the orange section, which offered us a perfect view of the stage. The Pirate’s Dinner Adventure includes a three-course meal. Non-alcoholic drinks like soda, water, lemonade, coffee and tea are included. You can also request a vegetarian. gluten-free or vegan meal in place of the traditional dishes. Children will receive the kid’s platter, which includes small portions of mashed potatoes, macaroni & cheese, and cubed melon alongside a generous amount of chicken nuggets.

Soup or Salad – Guests have their choice of either a large dinner salad or a small bowl of vegetable soup. I ordered the salad, which was large for a dinner salad. It was already covered with ranch dressing, which was fine, except that the server never asked me what kind of dressing I wanted (and I usually request dressing on the side). My older two kids ordered soup.

Main Course – Roasted quarter chicken leg and thigh. The meat was moist and flavorful. There was a veggie and shrimp skewer, which was also tasty. Carrots and zucchini are served on the side (zucchini was slightly under cooked, which was better than being overcooked in my opinion). Creamy mashed potatoes rounded out the plate. Our server did bring a platter with more chicken to see if anyone wanted another piece (my husband did).

Dessert – A slice of tres leches cake that is drizzled with chocolate. Usually not my favorite dessert but this was delicious!

Overall the food is good and our platters were served hot. Note that your entire party may not be served at once (my older kids didn’t get their plates until about 5 minutes after their dad and me). There are additional upgrades that can be made to your meal, including adding lobster and champagne or three-layer chocolate cake. 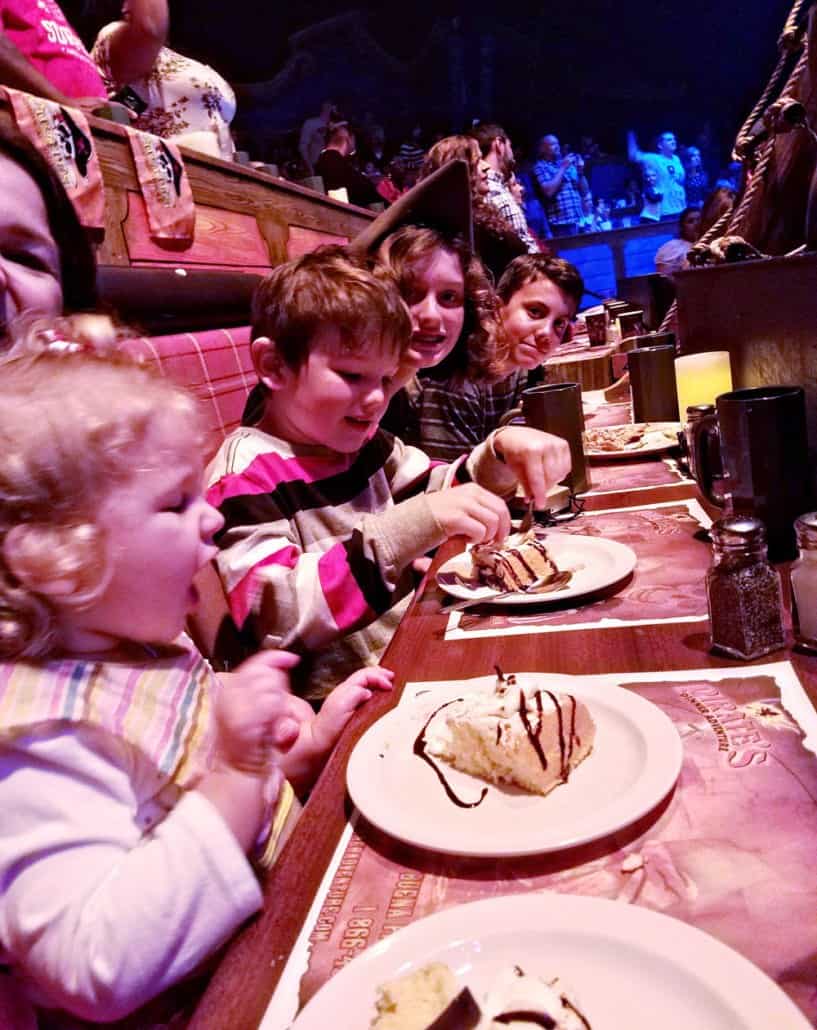 The toddler is obviously VERY excited about dessert!

Pirate’s Dinner Adventure is a loud and boisterous place. This means it can be a challenge to get messages to the server. We were seated at a long bench table. If you’re seated in the middle, you won’t really be able to speak to your server directly without yelling! I had to “talk” to the server by telling my husband and having him pass the message to the server. Meal plates are passed from the ends to the guests in the middle of the table. Not every seat is like that in the theater, but having the bench seats without server access made it difficult.

We received beverages at the beginning of the show but they were never refilled. Guests are encouraged to “Drink! Drink!” at times during the show and my 6-year old said to me with his stein turned upside down, “I can’t drink, my cup is empty!”

Throughout the show, the audience is encouraged to participate. Each colored seating section is assigned their own pirate. We sat in the orange section and cheered on our themed pirate throughout the show. Shouting, standing, banging your cup and cheering is all encouraged! My husband was given the job of raising our orange flag. Some children were invited to the stage to ride in one of the row boats. Other guests were included in the show as well. It’s a boisterous place and that adds to the fun! The Show – Legend of the Loch Ness Monster

This action-packed show takes place on what looks like a Spanish galleon. The ship is surrounded by 200,000 gallons of water on which row boats float. The “stage” is impressive for sure, and the colorful lighting and dramatic music adds to the effect. Did I mention the shirtless pirates? These singing, dancing and sword fighting pirates swing from ropes, leap on trampolines and duel each other throughout the show. Each pirate has their own personality and allows for plenty of comic relief in between the drama.

There is also a comedic “pirate in training”, a headstrong princess, an acrobatic gypsy girl, a teensy-bit of romance and lots of one-on-one pirate battles. The stunts are all great quality. The swinging ladder was my favorite part (I held my breath the entire time!) Don’t bother trying to figure out the story plot in between eating. Just watch and enjoy (ahem, shirtless pirates!) Can You Take a Baby or a Toddler to Pirate’s Dinner Adventure?

We mentioned on the reservation that we would have a toddler with us. I asked initially if there were high chairs and was assured that there were. However our seats were in the second row, which was all bench seating with one long table. There wasn’t any way to get a high chair there for our toddler. I asked our server for a booster seat, but it was never brought.

The seat and table were too far away from each other for my petite toddler to sit at (she is just a few weeks shy of her second birthday). My husband and I ended up taking turns holding her on our laps so that she could reach the table to eat. She watched most of the show but started to get bored towards the end (naturally, after the cake was served!) I took her out into the lobby to run around until the show was over.

Trying to hold a squirmy toddler while watching the show.

What Age Is Most Appropriate?

We attended Pirate’s Dinner Adventure with our almost-2 year old daughter, 6 year old son and two 14 year olds (boy and girl). I already shared about my toddler in the section above. There are some loud moments (like thunder sounds or cracking whips) that might startle young children. The show is appropriate for all ages but at 2 hours, it might be too long for some children. 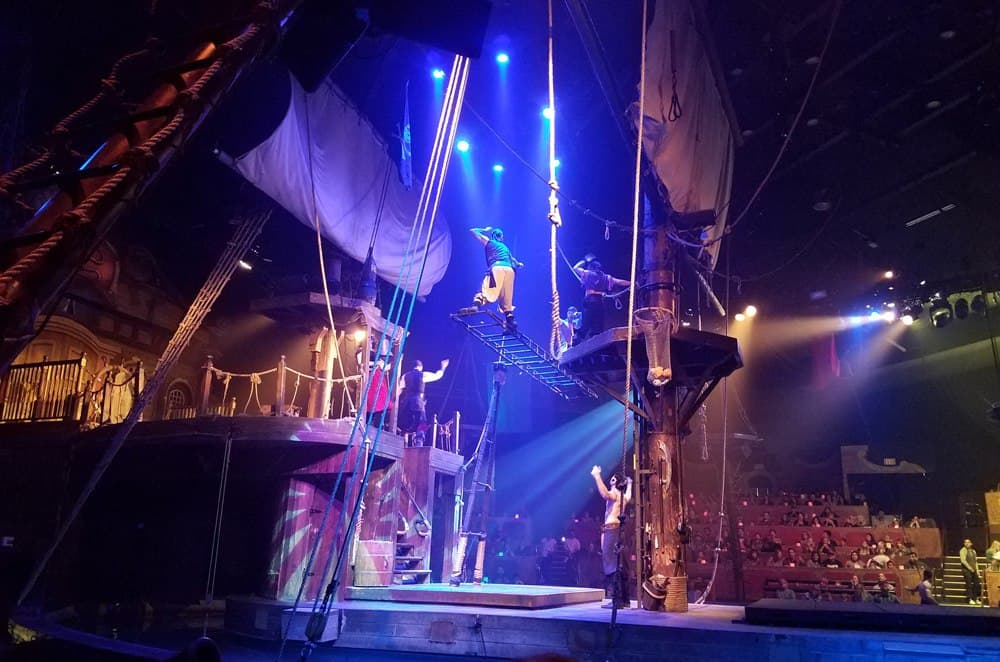 My older three kids were highly entertained. They all liked the food and enjoyed the action. My 6 year old lamented that he wished he’d been chosen to go onto the stage! There is one scene at the end that frightened my son and he hid under the table (I promise, it’s not that scary!) My teenagers both liked the show though my jaded older son said it was a “little corny”, but I don’t think that was a bad thing. Who Will Enjoy Pirate’s Dinner Adventure?

If you’re looking for a high-brow, elegant dinner, this is not the place for you. If you like to relax, enjoy live entertainment and can get into the fun atmosphere, Pirate’s Dinner Adventure is a great family place! You can read my review of Medieval Times (which is literally a block away from Pirate’s Dinner Adventure) so you can compare the two and see which is the better choice for your family.