185 shares
As soon as the weather cools, you can be sure this Rosemary Potato Soup recipe is simmering on my stove top! This creamy (and relatively guilt-free) soup includes the rich flavors of potato, garlic and fresh rosemary herb. Additional toppings like bacon and green onions take this delicious soup over-the-top.

I’ve been making this soup for years, much to the delight of my family. It’s a two-step process (roasting the potatoes, onions and garlic) then blending ingredients to prepare the soup. I like that I can prepare the potatoes ahead of time and then put together the soup quickly for dinner so it’s hot and ready.

This soup is appropriately creamy and flavorful with a wholesome thickness. What makes it guilt free? While this cream soup does include half and half, it skips the heavy cream and butter. The creaminess and thickness of the soup comes from the mashed potatoes. I’ve also successfully subbed in milk instead of half and half in a pinch. You’ll lose a little bit of the thickness but it’s still soooo flavorful! Even my soup-hating kid loves this recipe because it tastes like a loaded baked potato!

You’ll peel only half of the potatoes in this recipe, leaving the other half unpeeled and left in chunks inside the finished soup. Creamy but still has tender chunks of potato, all with the rich flavor of garlic and rosemary blended in. I’ve made this soup with both Yukon Gold and russets. Whatever potato you have on hand should be just fine. 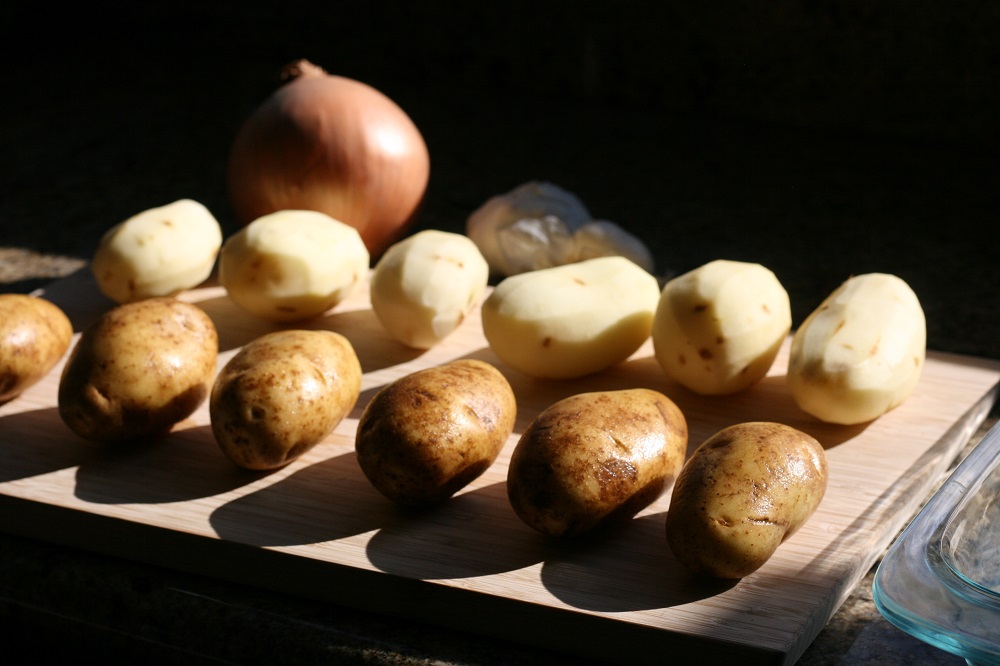 Peel only half the potatoes, then cube them all, keeping peeled and unpeeled separated. 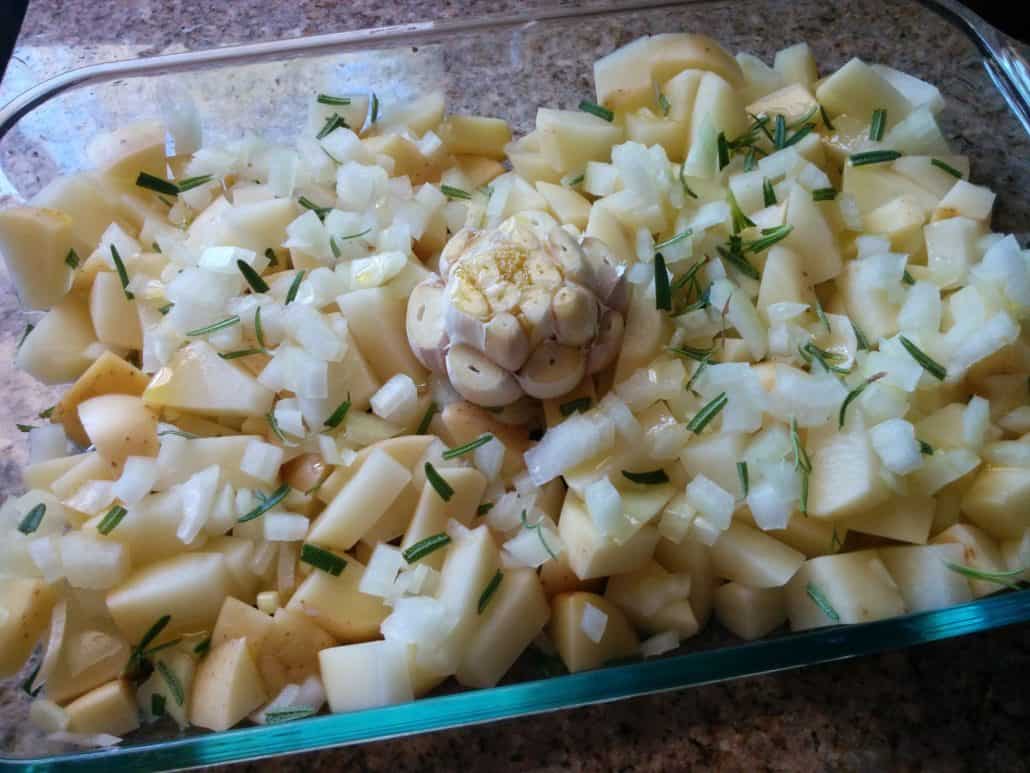 I’m lucky to have several big rosemary bushes growing in my yard. Rosemary is fantastic for use in cooking and it’s so handy to have it just outside the door! Fresh herbs are pricey when store-bought. And if you have it growing in the yard, it’s one less thing to pick up at the grocery store, right? Super easy to grow as well. I used a total of four long springs in my recipe but if you’re buying the rosemary, it would probably be the entire package.

Pull the rosemary from the stem and mince. Sprinkle across the top of the potatoes and onions. Remove the dry outer papers from the outside of the garlic bulbs, without pulling the cloves apart. Nestle the bulbs in the middle of the potatoes, between the peeled and unpeeled.

The garlic bulbs should be sliced across the top to expose the bulbs inside. Drizzle olive oil on each clove and then across the potatoes. Cover the casserole dish tightly with aluminum foil and bake for an hour. The potatoes and onions should be tender. Once the potatoes and garlic are done cooking, remove the garlic bulbs from the pan to cool slightly. Carefully squeeze the garlic paste from each clove into a large pot (I use a Enameled Cast Iron Dutch Oven

Scoop out only the peeled potatoes and the onions from that side of the casserole dish to add to the pot. Use a potato masher to mash and cream the cooked potatoes and garlic paste until almost smooth. Add in half the broth and all of the flour and pepper to the mashed potato mixture in the pot. Continue to use the potato masher until nearly smooth.

Over medium heat, add the remainder of the broth, the peeled potatoes and onions on the other half of the pan and all of the half & half to the pot. Cook and stir until bubbling and hot. Ladle into a bowl and add toppings (see next section for suggestions). 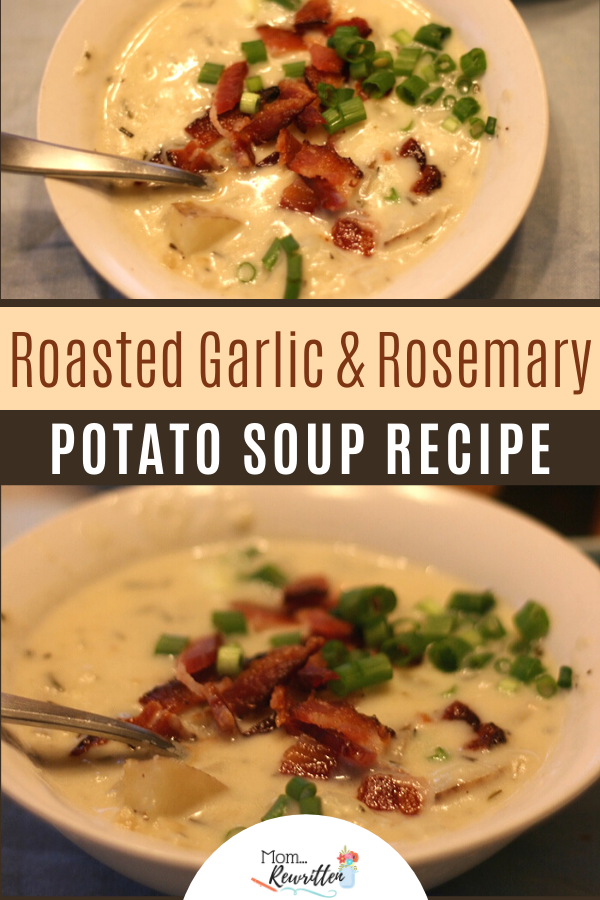 How to Serve Rosemary Potato Soup

This soup is wonderful served as a meal of its own. It’s warm and hearty by itself but we often serve it alongside these side dishes: 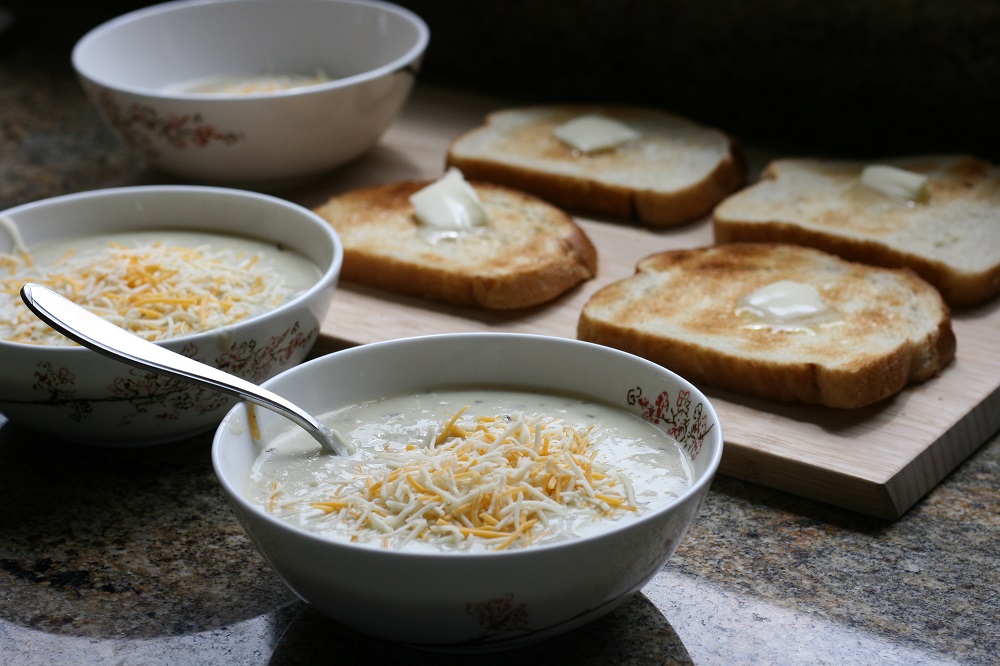 While this soup is delicious on its own, there are optional mix-ins you can add to this soup recipe. We served our soup with both bacon and green onions for a “loaded baked potato” flavor. You could go completely over-the-top and add shredded cheese too, wow! 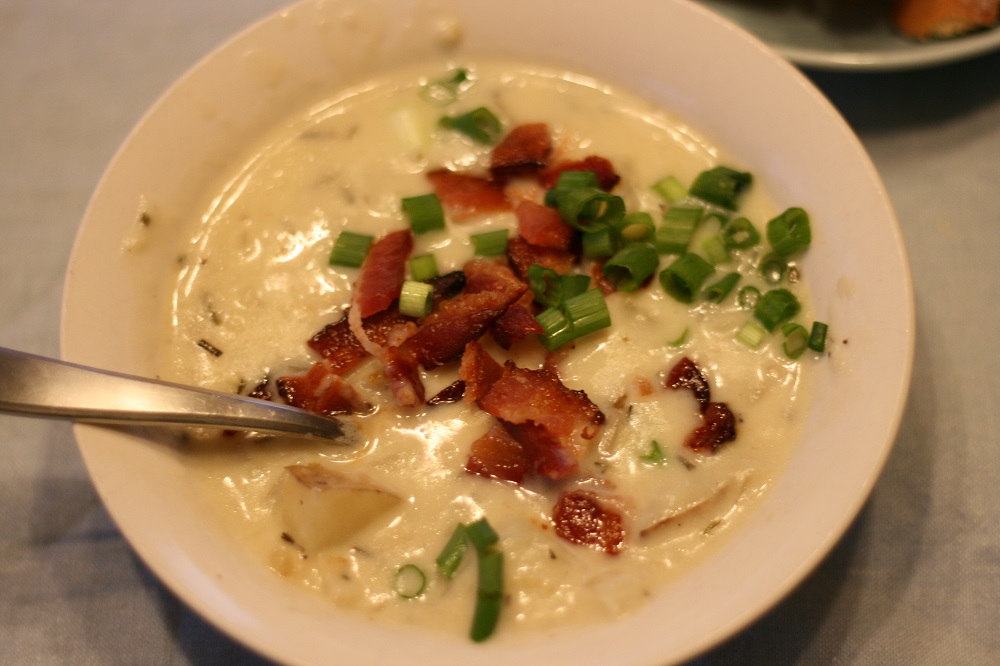 Warm the leftover soup back up in a pot on the stove over low heat. Drizzle a little milk as you stir to reheat. It will come out even more delicious than the first day!

For another hearty soup recipe, try this budget-friendly  Bean and Lentil Soup Recipe.

This recipe for rosemary potato soup will yield about 10-12 bowls of soup. If you aren’t feeding a large family, you can easily halve this recipe to make a smaller pot of soup. Or make the recipe as is, then cool the leftovers and pour them into a gallon-sized freezer bag. Lay the bag flat and freeze for up to 6 months. Place in the refrigerator to defrost overnight, then transfer to a pot for reheating.

This recipe can easily be halved. See original post for optional add-ins. 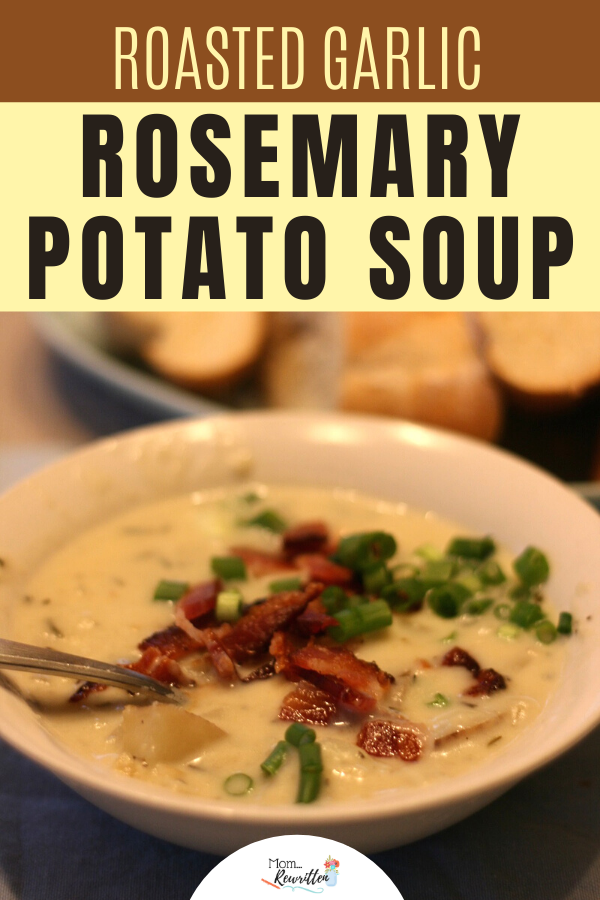 This post was originally published on Oct 25, 2016 and has been updated and republished.

[…] tested out a few new recipes on my family before sharing them with my readers here including Roasted Garlic & Rosemary Potato Soup, Slow-cooker Baked Beans and Oatmeal Peanut Butter Cookies. Since having the baby and working to […]